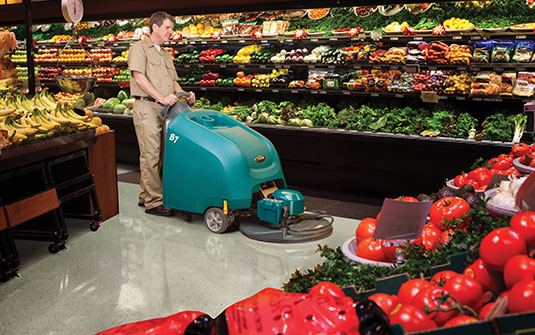 One glance and you know a well-burnished floor. The shine is unmistakable.

And while the “wet look” does put warmth in the heart of a maintenance professional, it’s not just because of the shine. That shine means that a burnisher has taken a high-speed pass over the floor, smoothing over any scratches and imperfections in the surface that could collect dirt.

Ultimately, that’s what the burnisher’s purpose is: to make hard floors extremely shiny and help the finish hold up against dirt for a while longer.

Use the right machine.

This one may seem obvious, but burnishing requires the right machine. And while most burnishers look similar to buffers, they function very differently, so you can’t just put a burnishing pad on a buffer and call it a day.

As we mentioned earlier, burnishers operate at high speeds — between 1,500 and 2,500 revolutions per minute. This higher spin rate enables burnishers to generate more friction with the floor surface and produce the famed “wet look.”

Go where the machine takes you.

Burnishers move forward and backward, unlike the side-to-side motion you’d use with a buffer. Since we’re speaking generally here, burnishers are also easier to operate than buffers in most cases. A burnisher’s wheels regulate the height and angle of the pad, and also the forward and backward motion. You can simply direct the burnisher straight ahead, and then slightly overlap that path on the next pass. Buffers, as you probably know, can become unmanageable if you’re not careful.

Do your prep work.

You always want to dust mop and wet mop a floor, at a minimum, before using a burnisher. But most often, you’ll also want to buff the floor to work out deep scratches, scuffs, and stains before turning to the burnisher. You may be tempted to let the burnisher do some of that work — after all, it does spin awfully fast. But while the burnisher is a high-speed process, it’s not a high-pressure one. Most of the burnisher’s work happens lightly on the top layer of floor finish.

While most of a burnisher’s work happens lightly on the top layer, not all of it does. Burnishers can work a little more deeply depending on the pad that you use. In general, the softest pads are used with burnishers to truly bring out that high-gloss shine without having much of an impact on a floor’s finish. But some coarser pads are designed for use with high-speed machines. If you do want to use a slightly coarser pad to allow your burnisher to do some buffing double-duty, do so very carefully. With the speed that the burnisher operates at, you can easily strip layers of finish.

Does it feel dry in here?

While there are some exceptions, burnishing is generally a dry process, unlike buffing. That means some dust may be generated during the burnishing process. You’ll want to be aware of this and have a dust mop ready to use occasionally during burnishing. Another option is a dust-control burnisher, which can help mitigate this side effect. 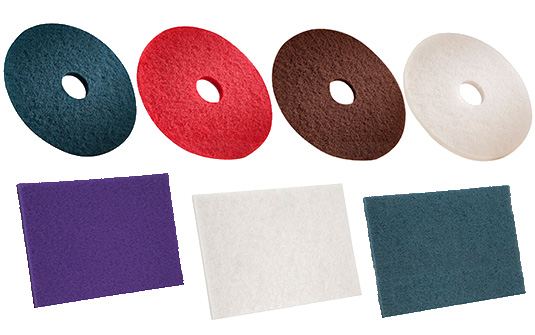 Tennant pad drivers, designed specifically for Tennant machines, can accommodate a variety of floor scrubbing and burnishing pads that are used in stripping, cleaning, polishing and burnishing.

You just ran a machine spinning at 1,500 RPM over the floor. You’re done, right? Not yet. You’ll need to make one final pass with the dust mop and the wet mop (or a scrubber) to make sure you get any residual dust off the floor. Then, you’re officially done when you stand back and admire the shine.

Buffers and burnishers are each highly effective tools to include in floor cleaning routines. By following these burnisher best practices, your floors benefit from having both of them at your disposal. 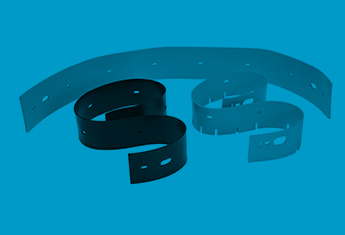