Wells Concrete Teams with Tennant for a Cleaner Sweep

Silica is a natural substance found in materials common on construction sites, like concrete, rocks and sand. The dust created by cutting, grinding or drilling concrete products can contain respirable crystalline silica. Over time, exposure to these silica particles causes scarring in the lungs, which can harm your ability to breathe according to The American Lung Association.

The control of airborne silica dust is a constant challenge for industries that create the dust. And OSHA is insisting that employers ensure workers are safe and silica dust exposure is minimized. Companies need to comply with the new OSHA rule, part of which includes creating an Exposure Control Plan to demonstrate how they are implementing changes that move toward compliance.

The key to preventing silica exposure is to keep silica dust out of the air. That’s a tall order for a giant manufacturing site. Former methods like broom sweeping are neither efficient nor effective.

“You can imagine, if someone were to ask you to clean your house with a toothbrush, that’s what it would be like when we use a floor broom to clean our factory,” says Ben Dalsing, Wells Concrete plant engineer. The OSHA rule prompted the Wells team to look to Tennant for a solution. 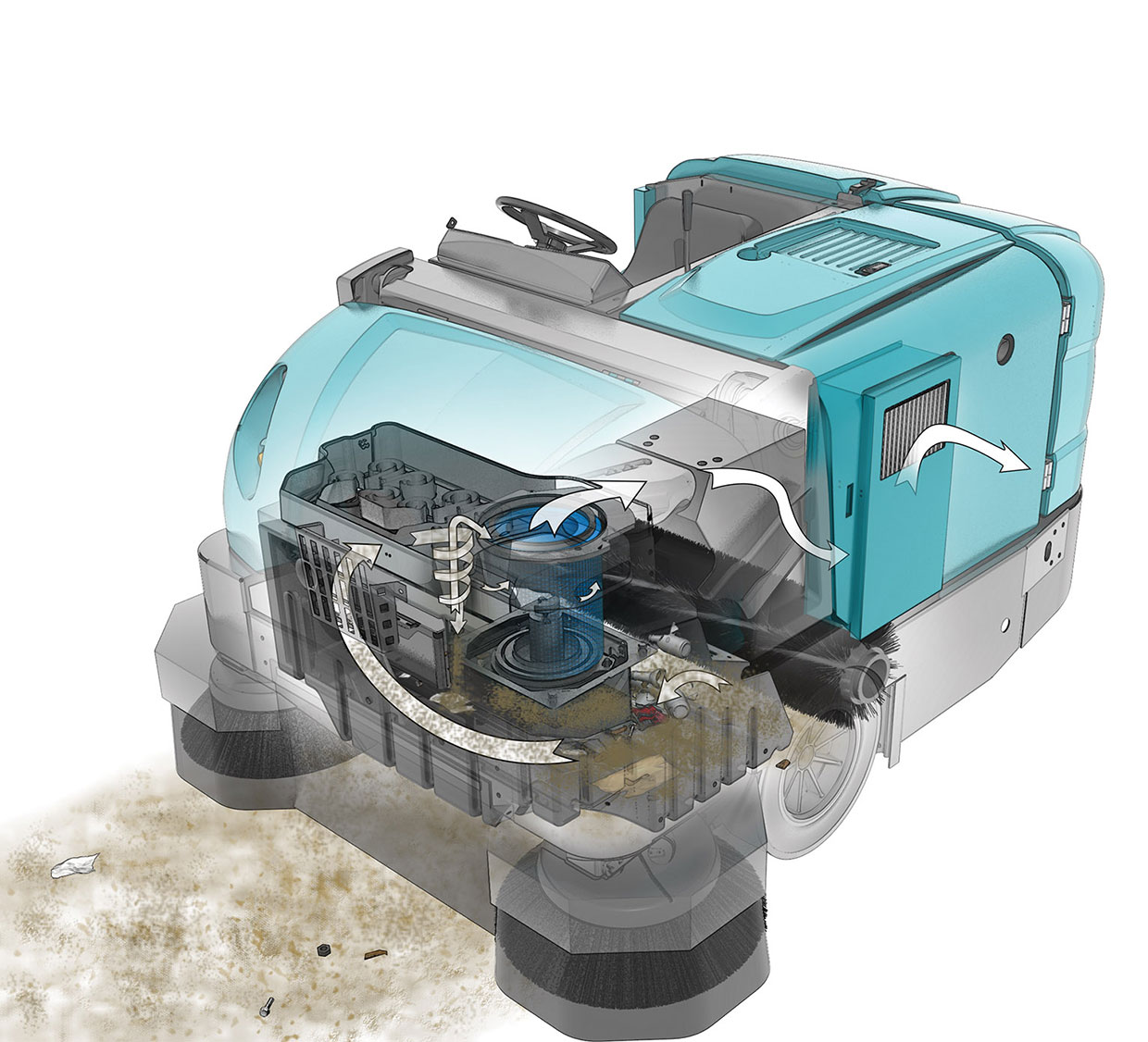 Tennant offers three types of dust control methods that can be used to support OSHA silica control housekeeping requirements. As Tennant was developing its offerings, they needed a location to test their HEPA-enabled sweeper and Wells decided dry sweeping with HEPA filtration was an ideal solution for them. “Tennant wanted a testing grounds for a machine with a HEPA filter, and I graciously offered our factory as a very dusty environment,” explains Dalsing.

The Tennant S30 is a versatile and durable mid-sized industrial sweeper with a three-stage primary filter system, plus the option of a 4th stage HEPA dust filter.

“A HEPA filter has a special filter media that can clean to a very high standard by removing microscopic particulate from the air,” says Mat Segar, Tennant Current Products Engineer for Sustainability. The S30 with HEPA filtration sweeper has been in testing for over 60 days and has picked up over 9 tons of dust and debris. Segar goes on to say, “the impressive thing is that the primary filter system is so effective that the HEPA filter has only gained a little over a pound and a half of debris within that timeframe.”

Based on the Wells testing, the HEPA filter should last at least six months, possibly up to a year depending on the customer’s application. Proper usage and maintenance practices will help increase the effectiveness of the machine’s filtration stages and the life of the HEPA filter up to six months, perhaps longer.

Wells Safety Manager Mike Frieler measures the dust in the air at the plant and says he’s seen improvement with the new sweeping system. “It’s a lot cleaner than just a broom and a dustpan. It contains the dust within the filters, so you don’t have it floating in the air and people breathing it in. A lot better than the old way," says Frieler.

“The act of pushing a broom kicks dust up into the air. And that’s one thing that OSHA doesn’t want anymore. So we’re using the Tennant sweeper to capture the dust and debris,” says plant engineer Dalsing.

The Tennant S30 not only helps create a healthier environment for workers, it’s more efficient too. “I’m estimating that it takes between ten and fifteen hours of pushing a broom to clean our entire factory, and the Tennant machine can do that in anywhere between a half hour to an hour and a half,” Dalsing states.

“This will allow you to have one operator be much more efficient, do the same amount of cleaning in a very short period of time, where you can free up operators to do other things,” says product engineer Segar.

While it was the OSHA regulation that encouraged Wells to seek a healthier cleaning option, the company is committed to keeping its workers safe. “As a company you invest in your employees, so if you’re not taking care of your employees, you’re not going to have a company,” says Safety Manager Frieler. 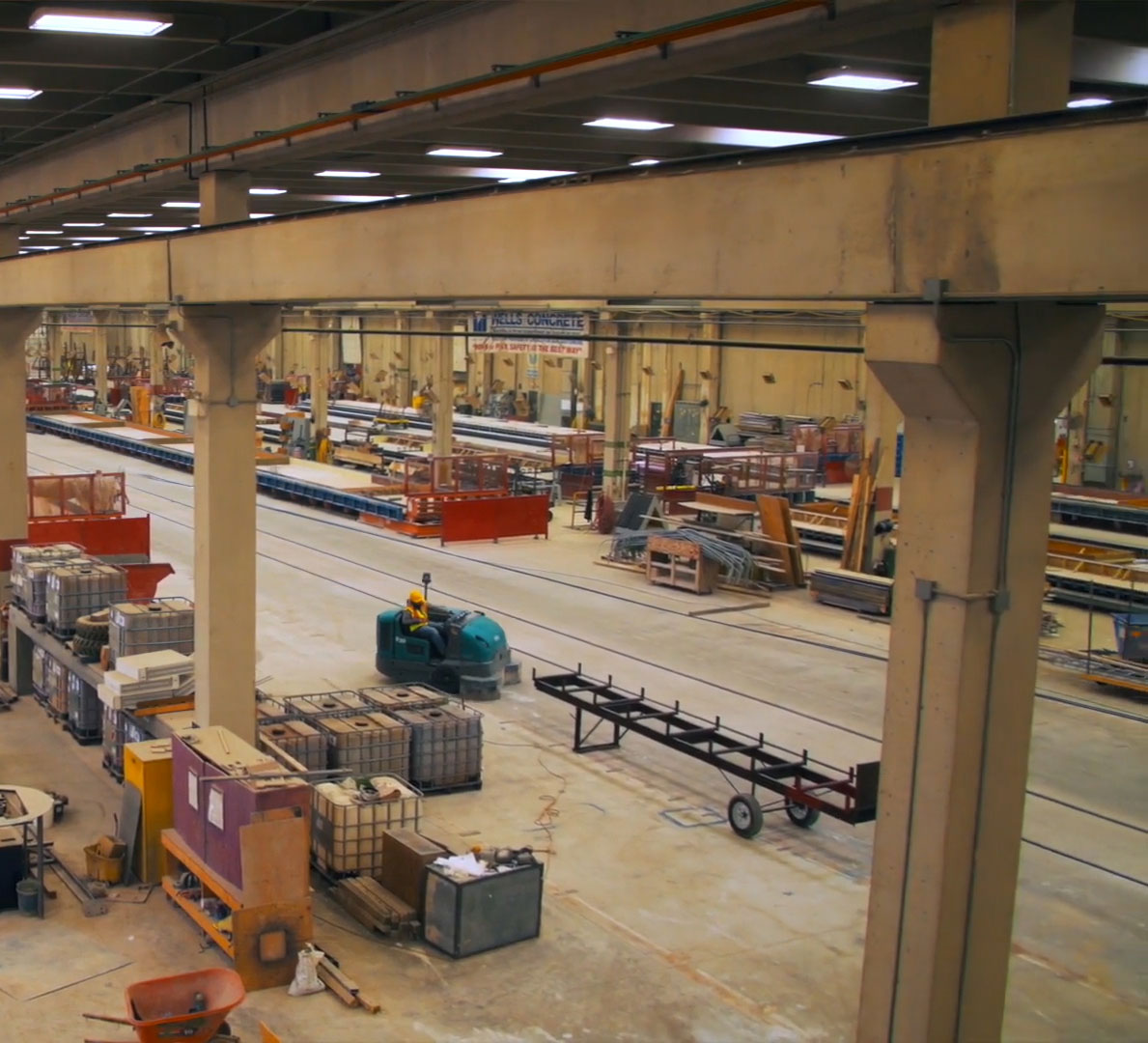