The Impact of Robots on Employment

Robots are entering the workforce across the board, from cleaning the floors to helping to manage pharmacies.  According to Forbes, within the next ten years, computers will be able to write a better essay and drive a truck more skillfully than a human being. In that light, it's easy to see automation as a rising tide that will carry away a great many jobs in the near future.

But as it turns out, a rising tide may lift all boats: the impact of robots on employment isn't as simple or clear-cut as it would appear. Recent real-life scaled robotic implementations are providing us with a clearer lens into what the future may hold. For example, it’s becoming more clear that robots aren’t just going to create new jobs, but also new business opportunities, and we can’t yet understand the impacts to employment or industry as a whole.

Robots can do work that is onerous, challenging, or dangerous.

There are some jobs that are so hazardous -- such as logging, which leads to approximately 60 fatalities in the US per year -- that introducing robots to do some of this work is the obvious answer. Even where the work is simply challenging or repetitive, using robots in business and employment makes good sense.

Automatic cleaners are a great example of robots that can perform tasks that are challenging or onerous for human beings. Keeping a floor clean in a busy store, negotiating both the store layout and the moving customers, can be a real challenge.  Moreover, cleaning can be backbreaking, and slips and trips that lead to injury are common.

Employing robots to do jobs that are challenging, onerous, or dangerous for human beings can also free employees to do the higher-level work that still requires a thinking human brain: stocking shelves, creating intriguing displays, and interacting with customers.

While short-sighted managers may use automation as an excuse to cut staff or staff hours, successful companies will leverage their increased productivity.  For example, an automated unloading system now used at some Walmart stores was found to lead to swifter re-shelving, prompting the store in question to pay its employees for more hours' work re-stocking and almost eliminating the backbreaking work of lifting packages out of a delivery truck one by one. This may increase profits as well, since stores are less likely to appear to be out of stock of their most popular items.

Tasks that are less onerous can also increase job satisfaction and retention for employees. Creative managers will survey the new landscape of work and outline more fulfilling tasks for their employees, leading to better service for customers and higher revenue for businesses.

The robotic revolution isn't about fewer jobs, but different jobs.

In the 1970s, it was impossible for the average person to anticipate the burgeoning opportunity in programming, design, and gaming. The arenas in which one may work will continue to shift, but that doesn't mean fewer jobs overall. Joblessness is actually lower than it was before the technology boom.

While many will undoubtedly be hired to tend to repair, operate, and build robots, and analyze the data they produce, the real source of new jobs in the next few decades is likely an industry we can barely imagine, now ­ or a new spin on something familiar.  The telephone repairman industry isn't booming, but the cell phone industry is. Restaurants are booming because Doordash and Grubhub have led to new opportunities for food — whether it’s cheap or upscale — to be delivered to customers.

If past is prologue, it's not so much that there will be fewer jobs in the future as that we cannot predict what those jobs may be.

Meanwhile, robotics can eliminate dangerous jobs and take over onerous jobs, freeing their humans to be more creative, less harried, and have more time to help each other.

Are robotics right for your cleaning business? Take our evaluation to find out.

Amadeo, Kimberly (Updated May 2019). Unemployment Rate by Year Since 1929 Compared to Inflation and GDP. https://www.thebalance.com/unemployment-rate-by-year-3305506

Coats, Kenneth (December 2018). Let The Robots Take Over: How The Future Of AI Will Create More Jobs. https://www.forbes.com/sites/forbestechcouncil/2018/12/28/let-the-robots-take-over-how-the-future-of-ai-will-create-more-jobs

Linder, Courtney. (May 2019). To keep up with Amazon, retailers are turning to automation — robot janitors and all. https://www.post-gazette.com/business/tech-news/2019/05/20/automated-robotic-grocery-stores-markets-retail-amazon-labor-giant-eagle-tally-walmart-pittsburgh/stories/201904220001 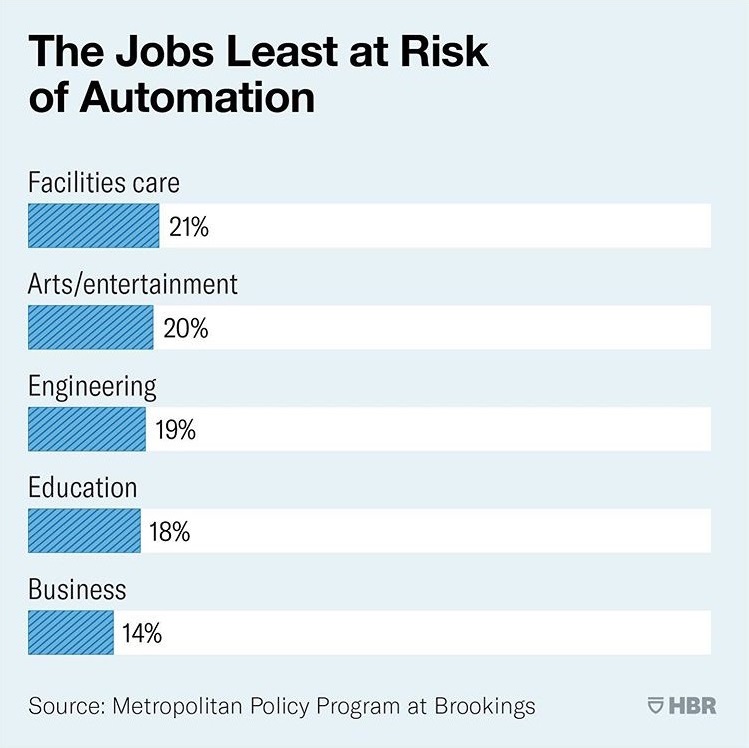 Facilities Care jobs are one of the least at risk of automation.

The Robotics Revolution and Your Cleaning Business

How Tennant Integrated Robotics into an Existing Product